Christian Coleman didn’t plan the gesture. He didn’t even realize he was performing it.

Right as he crossed the finish line, Coleman outstretched his fingers on both hands in a “V” formation — for victory.

A convincing one at that. 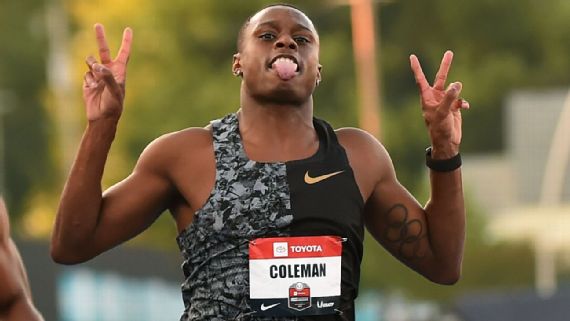 Coleman cruised to the 100-meter title at the U.S. track and field championships Friday night in a final that Justin Gatlin elected to sit out.

The 23-year-old blasted out of the starting blocks and finished in 9.99 seconds. Michael Rodgers was second by thousandths of a second over Christopher Belcher. Both times flashed 10.12.

“It felt smooth. No complaints here,” said Coleman, who’s planning to run the 200. “I feel like I pretty much controlled it from the start.”

The 37-year-old Gatlin ran in the semifinal round, but his lane was empty for the final. He already had a guaranteed 100 spot for the world championships in Doha this fall, because he’s the defending champion.

Bummed not to see Gatlin?

“Not really. I just wanted to make the team,” Coleman said.

Two years ago in London, Gatlin edged Coleman in the 100 final.

Round 2 is coming up in Doha in late September. Their rivalry just might be a preview of things to come at the Tokyo Olympics in a year.